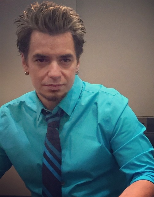 Celebrity hairstylist Christos Andrianis has contributed his talents to the hair industry for over 21 years. His studies began in Greece and then continued to the United States where he then worked under John Frieda. Christos's hair cutting technique? ... "I begin a haircut focusing only on the length while the hair is still wet. I then finish the haircut dry which allows for better control of the entire shape of the cut and it also gives a more natural custom look to my clients hair style."  His talent also extends to customizing hair color, focusing on his clients natural beauty and tailoring the hair color to compliment the client's skin and eye tone.  By using only top quality professional hair color, coupled by his fashion forward artistic imagination, Christos creates his signature blondes, chocolate/caramel brunnetes, and copper/fiery redheads.

This artist prides himself in the detail and care he places on each of the clients he works on.  Through his continued education, he has received many acknowlegements from his industry peers.  Christos Andrianis is Master Certified in Brazilian Blowout which allows him to  customize anti-frizz hair treatments for a curly, straight or volumized hair looks.

By opening a salon that is centrally located, all clients in the tri-state are able to reach him convenientely. 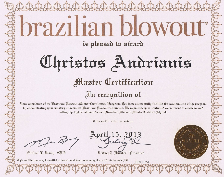